By the river near Ilanz to Versam - only about 12 kilometres.

Cold Pizza for breakfast. JP was over the moon about the view from our tent. 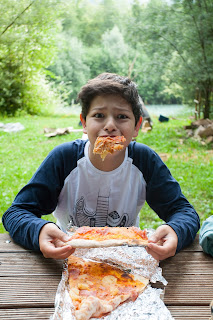 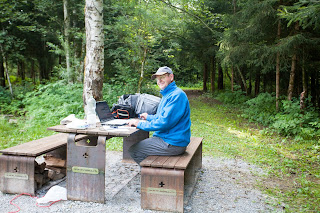 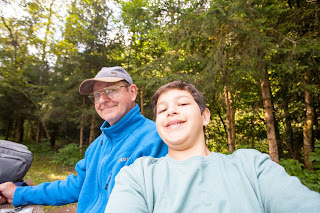 We cycled back to Ilanz where we filled all our water bottles from the fountain, and headed out on the BIG CLIMB that would take us almost all day. This would be the toughest day of the whole trip, as far as climbing hills was concerned. Not something I was looking forward to with a great deal of relish. Soon after leaving Ilanz, we stopped at someone's home to check that we were heading in the right direction – towards Castrich, then on to Valendas. 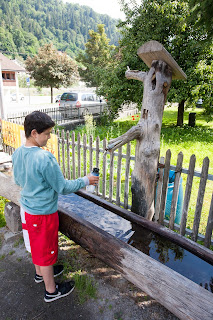 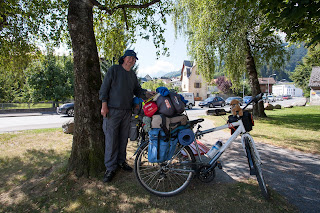 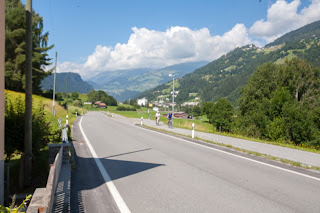 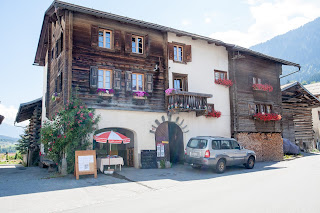 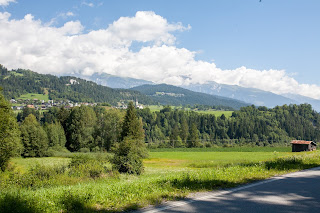 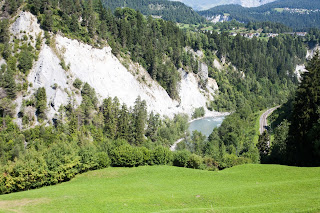 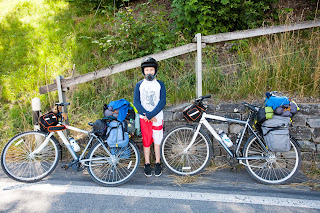 As we entered Valendas, I stopped in a shady spot for a rest. I didn't feel I could pedal another metre. JP was still as fresh as a daisy so I asked him to walk into town and buy some food and drink. He returned after quite some time having found a restaurant where he bought a couple of slices of Wähe – sponge cake covered in fruit – delicious, and a couple of Coke's. Just what I needed. We sat on a stone wall in the shade and enjoyed our feast, before proceeding up the hill into the town square where we parked our bicycles against the wall of the fountain. I sent JP into the restaurant for more Wähe – four slices of two different flavours. That and with all the fizzy drinks we'd consumed meant we'd got enough sugar inside us to have kept a Nestlé factory going for a week but it helped us to keep going (not that JP needed much help in that direction). 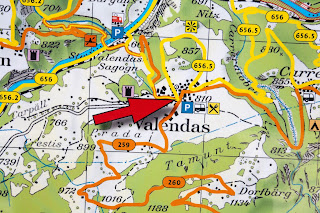 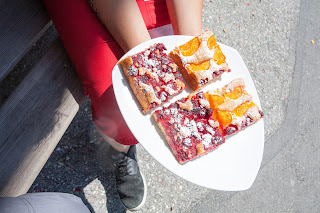 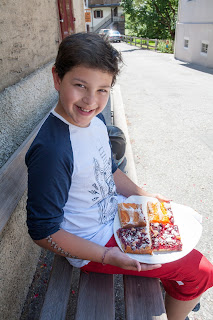 We were very privileged to be able to see, and for JP to participate in, a boat race in the fountain. The boats were made from wine bottle corks and the whole party was in aid of disabled (mentally!) children from somewhere else in Switzerland. JP always fits in well! 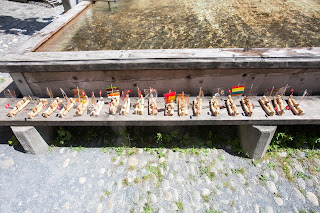 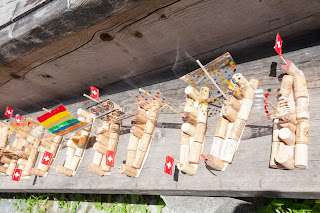 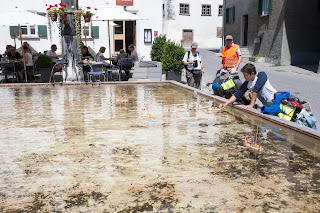 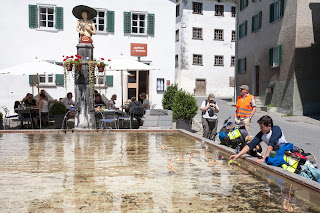 After our sojourn in Valendas it was back to the climb. At some stage of the climb, I was in front and when I stopped for a rest JP was nowhere in sight. I waited and waited in the sun. No JP anywhere. I drank as much water as I could and had a rest. I had little strength left in this heat – and I like it hot. I walked some distance down the hill and still could not see him. I walked back up the hill. I found a hiding place for my panniers and other luggage and was just about to unload and ride back down the hill when another cyclist came past saying he'd rescued JP. Much to my relief, a short time later, JP came into sight. He'd actually seen me looking for him when I'd walked down the hill without seeing him. 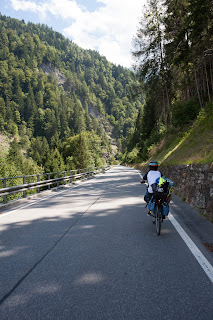 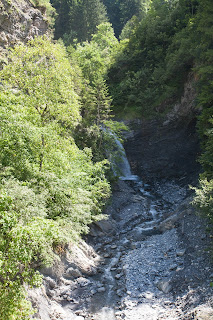 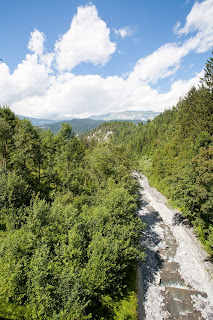 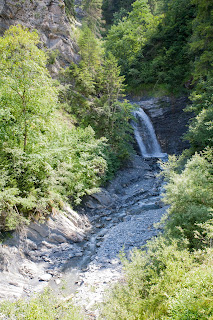 We arrived in Carrera where there was another fountain from which we could refill our water bottles and where JP could have a cooling splash. 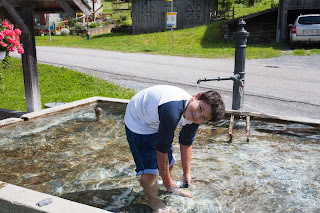 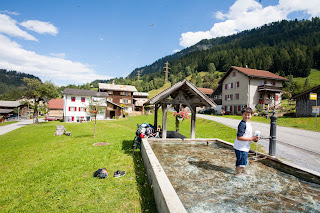 We headed on towards Versam. On one particular climb, JP went on ahead and returned to help his old dad up the hill. What a hero. While I was resting (again), he helped another cyclist up the hill for a way and when they stopped the cyclist gave him two Euros for his effort. We then climbed further and flopped out on someone's front lawn.

For a change, we came to a hill that was headed downwards, Great. We descended into Versam having covered a total daily distance of only about 15 km. Not exactly record breaking stuff. We found a really clean and comfortable public WC, where we could wash, shave, change our clothes and make ourselves look human again. It was in a building that had formerly been the (massive) home of the minister of the local church. It was now a block of flats – and public loo. The church was beautiful, as you can see in the photographs: 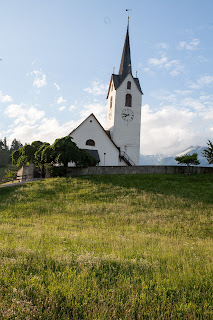 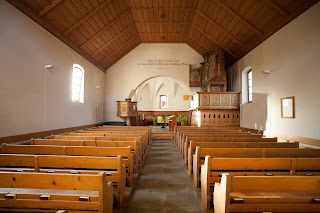 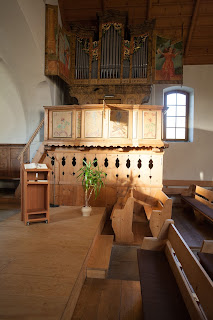 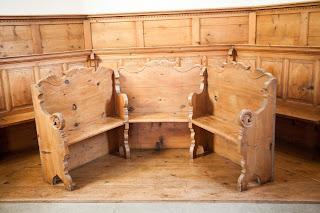 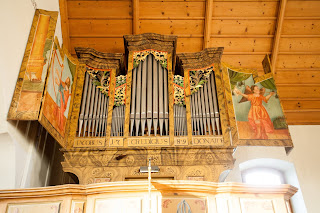 Whilst we were sorting out our stuff and getting loaded again I noticed there were three people in garden of the neighbouring property. I managed to get into conversation with them and, after going through the various non-options I suggested that it would be a good idea if we could camp in their garden. Two of the folks were visiting friends who quickly left and the lady of the house said she would ask her husband if we could stay. She returned with her husband who quickly weighed us up (good job we were clean and tidy after our ablutions in the public loo) and gave us permission to camp in their garden. How wonderful. We learned that they were named Ueli and Erika and Erika even offered to cook us a pasta meal, but JP said we were going to the restaurant, despite my glowering at him. We didn't go to the restaurant. JP stayed in the tent and I walked to the local, very beautiful church and took a few photographs. 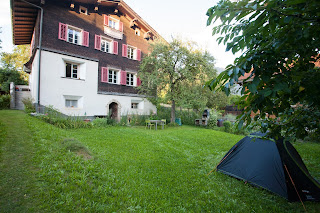 Ueli and Erika's lovely traditional (as we envisaged it) was built in 1913. It had been designed by Ueli's Grandfather (an architect), for his father, so had been in the family for more than a century. They said there was plenty of space for the family to use altogether, all ten of them. It was a huge house. It was only used as a summer and weekend home as their main home was in Zurich. Erika told me that it was hard being there in the winter as only two rooms were heated by the wood burning stove in the dining room. None of the other rooms were heated. In the winter, hot stones were placed in the beds to warm them – which her grandchildren loved. The rear garden overlooked the magnificent Rabiusa Gorge.

Much to JP's delight, a neighbouring cat came to visit us in our tent. The cat settled down with JP on his sleeping bag and really made itself at home. JP was so pleased as he loves animals which, as I told him, was the reason the cat had settled so well with him, as animals know the people who like them - or don't. 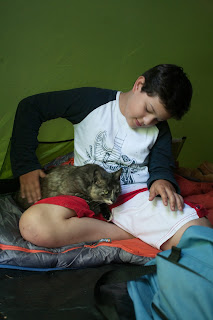