Speyer to Worms - we rode about 55 to 60 kilometres that included diversions when looking for a campsite.

We left the camp reasonably early for us - probably by about 1000 hrs. I asked the way to the River Rhine from the site owner and off we pedalled - I still had two bags of food dangling from my handlebars. 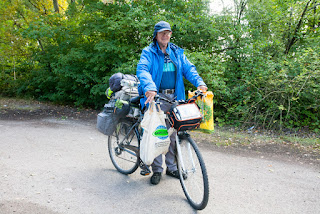 We crossed the dyke and dropped down onto the path beside the river. 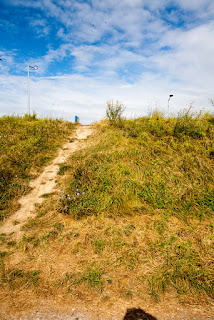 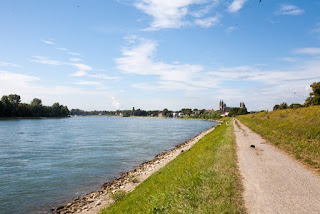 We made good progress on this rather cold day - which got colder as the day went on with a bitterly cold wind.

Somewhere along the way we were hailed by someone sitting outside a building that may have been a beer garden or restaurant. We stopped and a lady called out to me. It was the lady who had helped me find the bakers shop yesterday morning. She told me that she had visited the camp site to see us with some Asprins for JP but because we were in our tent she felt too shy to disturb our rest. How kind.

We got to a point on the path after about 20+ km where we weren't sure where to go. This would be close to Maudach, although we didn't know it at the time. We stopped for a breather at a junction in the path where there was no indication as to which  of three paths we should take. JP suggested we should ask a young lady who was sitting by a post talking on her mobile telephone. I waited for her to finish her conversation and then got talking to her. I asked her for directions to the Altrip ferry which we intended using to cross the River Rhine. She said we had to turn round and go back about 7 km. That wasn't good news. I then asked her for the directions to Worms and that proved to be more positive as we could get there via an alternative route without having to turn back for the ferry. The direction I'd intended going in would have brought us back to where we were, so it was a good job I'd asked her for help. We got going again heading to Worms.

After a short time, our friendly young lady caught us up on her bicycle (we ride quite slowly). She said she'd ride with us and show us the route around Ludwigshafen. That was areal bonus as we get lost quite easily.

Our new friend's name was Christina and she was an 18 year old university student, riding her father's old bicycle. JP, as usual, voiced his complaints about his bicycle and about me as he chatted to Christina. 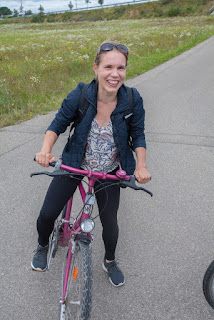 We rode past the massive BASF (in the distance) on the outskirts of Ludwigshafen. 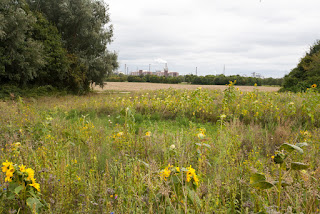 Christina rode with us for several kilometres until we passed under a road bridge which I believe was close to Petersau where we said our farewells and she set off back to near Ludwigshafen where she lived. 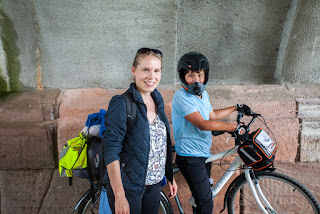 Just as we were about to move on, three girls from the campsite at Speyer rode past calling to us. We rode with them for the rest of our journey. They set a cracking pace which we couldn't maintain so they slowed their pace somewhat or stopped at intervals to wait. I said that, according to my guidebook, there was a campsite at Worms. We spent a great deal of time looking for it and got sent on many false directions before giving up and heading back to the city.  For the second time we crossed the huge bridge into Worms following the girls on their bicycles. 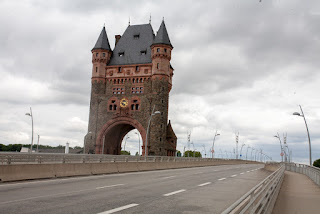 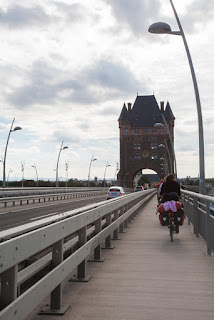 We arrived at the Youth Hostel in Worms on our last legs; at least JP and I were. Two of the girls, Fancesca and Dana, seemed quite fresh and they'd cycled more miles than any of us looking for a campsite. One of the girls, Emily, also admitted that she was tired. The receptionist at the Youth Hostel told us that all the campsites had closed, so our efforts to find one really had been in vain. 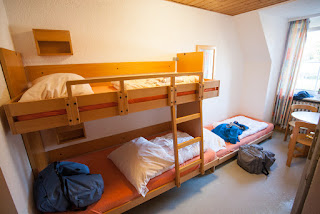 Our room in the Youth Hostel.
Posted by Cycling the Rhine at 23:32