Diepoldsau to Arbon - about 46 kilometres

Robert roared off at a snails pace – albeit a fairly quick snail, which was something of a relief as us non-cyclists are more plodders than pedallers. 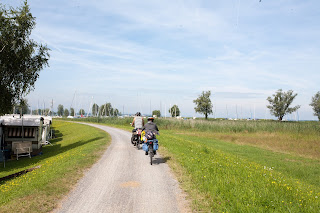 This was to be the first day of our little adventure that JP wouldn't fall off his bicycle. I was beginning to rename him 'Crasher Cook' as even when riding along a smooth flat road in a straight line, he'd somehow manage to fall off. After following him for some time I began to realise why – he was all over the road – anywhere from the middle of the road to the gutter. He just couldn't ride in a straight line! Anyway, today, almost stuck to the back wheel of Robert's bicycle and with me riding close behind him, he improved and never once fell off. 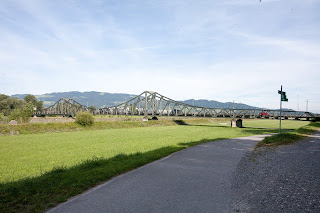 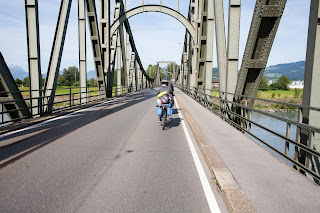 We followed Robert all day as he had a good SatNav and there were numerous navigational complications. Even Robert and his SatNav got it wrong once and we had to turn back in order to find the correct route. Robert had spent more on his SatNav that I had on our two bicycles and was far better equipped than JP and I in every respect. 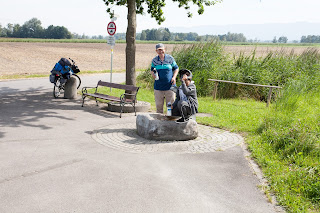 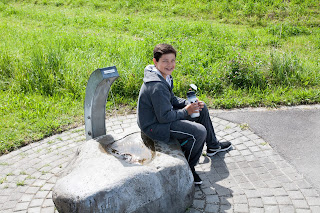 Immediately after leaving the camp site, we crossed the border into Austria at the start of a burning hot day. We had a pleasant ride, crossing the Swiss-Austrian border a few times throughout the day.

We stopped at a supermarket in Austria, where things are a lot cheaper that in Switzerland, and Robert asked me to get him some tomatoes, bananas as baked beans. I also bought some milk, bread and apple cereal bars.

We continued for a few more miles until, in the distance, we could see Lake Constance. We headed off at a tangent as continuing to the lake would have taken us into a nature reserve with no way out onto where we wanted to go. Throughout the day we passed palatial homes, none more so that those overlooking the lake. There must be a lot of rich people in these parts as these places would all cost millions of pounds. 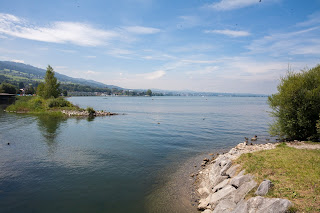 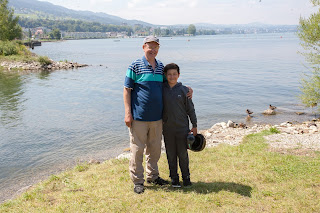 We stopped at about 1500 hrs. at a campsite on the shores of the lake at Arbon where we had an expensive, poor quality meal.