Buchs to Diepoldsau - about 45 kilometres

We were rudely awoken by the clanging of the local church bells at 0600 hrs. which annoyed JP intensely. 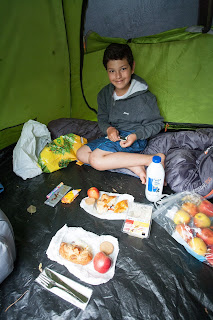 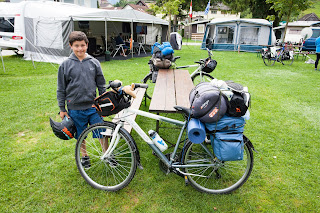 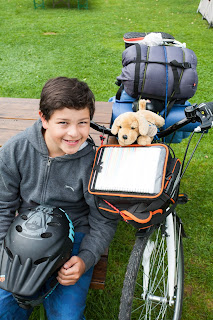 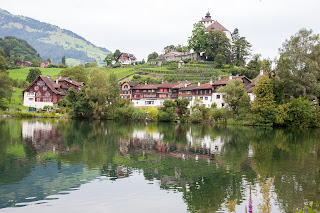 After striking camp and loading our bicycles, we cycled off in the direction of Grabs. We rode up the hill into Grabs where I stopped to ask for direction in the pharmacy. We'd ridden too far, so back down the hill we'd just puffed out way up. After asking several people who gave us inconsistent directions, we got onto the right road heading for Frümsen. The book said 'Turn R onto Gams-Haag road, then L onto asphalt lane to continue between fields for further 4 km.'. We couldn't see any asphalt lane, only a stony lane onto which we turned and headed through the fields. Some kilometres later. We ran out of lane and into the crops. Once again, we had to turn round. After some distance we turned left, onto an asphalt lane (not the one referred to in the book) and headed off at 90 degrees to the route we'd been on. Guesswork navigation again. Bear in mind that Frümsen is about 11 km. From Buchs and it left a lot of room for navigational errors. We had a fairly good chance of never even finding the place.

After crossing many field and farms we arrived at another road where we could have gone in either of the two possible directions. JP suggested we rode into the town we could see in the near distance and ask where we were. Not a bad idea. As we chatted and had a break, we saw a cyclist heading towards us from the general direction of the town. I flagged down the rider who was pedalling like mad and going quite quickly. The rider turned out to be a very pretty girl who told us that the town we could see in the near distance was indeed Frümsen. We couldn't believe our luck! She gave us directions as to how to get there on the bicycle path and off we pedalled. We were now back on track, our guess work navigation having been successful, and were now able to follow the book once more.

By about 1430 hrs, we were rather peckish so stopped in Rüthi to ask a lady where we could buy some food. She couldn't speak English but with the aid of signs and the word 'food' we got the message across. She pointed the Hotel Kamor a short distance away so we headed there - next to the railway station. We enjoyed a three course meal at a very reasonable price (for Switzerland) - far better than anything we'd eaten so far on this trip. The first course was Cream of Tomato Soup, with a few finely chopped spring onions. Next came a Green Bean Salad, also garnished. The main course was Chicken Fillets in a rather pleasant sauce, with chips and vegetables. We were really stuffed by the time we'd finished eating. 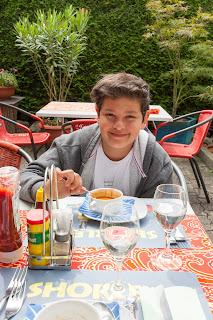 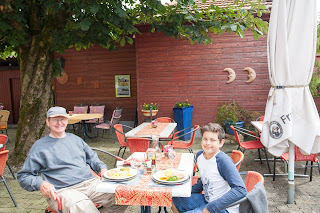 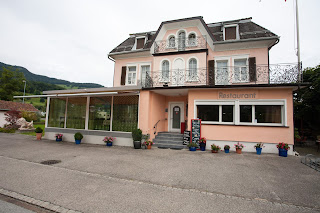 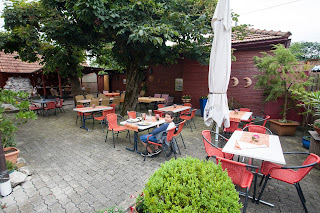 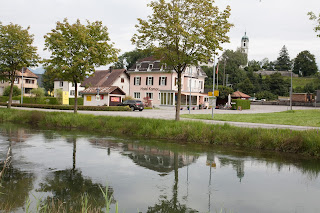 We continued on our way, alongside a canal and viewed several interesting houses on the way. 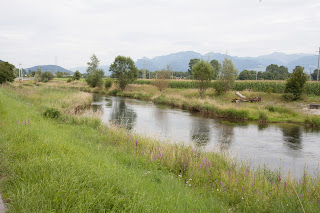 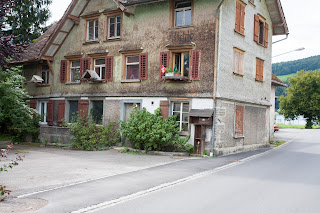 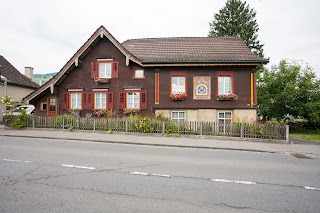 In Altstätten, JP spotted a crazy sculpture made from scrap metal and cars: 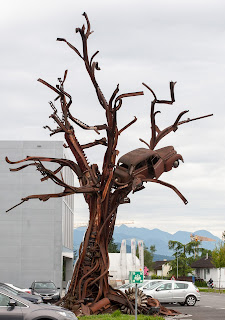 Apart from JP falling off his bicycle several times, there wasn't a lot of excitement I'm pleased to say, until, later in the day, we went off track trying to find a camp site. We arrived in a place named Diepoldsau, which wasn't exactly in our plan, where we found a site within a few metres of the Swiss-Austrian border. There we met Robert, a Dutchman also on the same trip as ourselves. JP went off to swim whilst I chatted with Robert.