Camp to Strasbourg - About 50 kilometres.

Today it is 3 months since Annelise went to Heaven. She seems to still be with us in many ways. We talk about her a lot.

A somewhat better day today, as far as riding and travelling are concerned. It was extremely hot on the road today. After we'd run out of water we cycled on until we found a few houses. I banged on the door of one and a young man filled our water bottles and gave us a full, new bottle of mineral water. So kind of him and a great help to us. JP says his legs are getting stronger but his energy levels are getting lower. However, he kept pedalling all day and did well. He did fall off once in the late afternoon, probably because he was so tired.

At some stage we came across the a canal where we stopped for a snack. I give quite a lot of the food preparation tasks to JP which he seems to enjoy. We hadn't bothered with breakfast so we ate some of the surplus from yesterday - old baguette with old ham and very, very soft Camembert cheese. No cutlery was available so it was a matter of fingers and teeth. 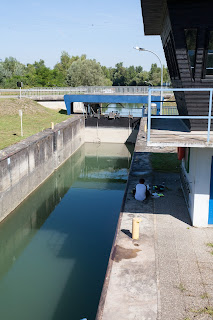 As we sat by the lock, we could see a barge approaching. Once in the lock, we found that the Topaz had British owners whom we chatted with. They lived on their boat throughout the summer and cruised all over Europe with it. 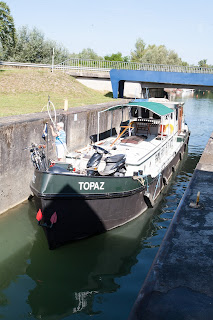 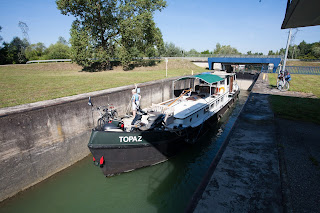 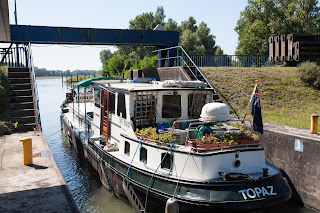 At about lunchtime, we found a rather nice restaurant by the side of the road in Krafft. We made our way in looking like a couple of scruffy, sweaty tramps. We enjoyed our meal - and the apricot juice. 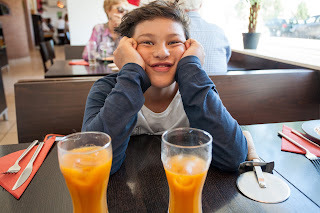 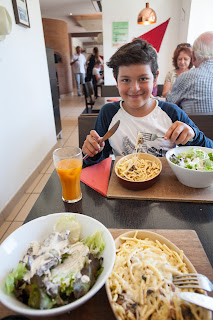 In the late afternoon we arrived in Strasbourg. After finding a small shop open, unusual in much of Europe on a Sunday, we bought some basic supplies and found a park where we could sit ant eat. A crowd of youngsters came by and I told them about our adventure. They were amazed! and clapped  us and said 'Salut'. Great kids. 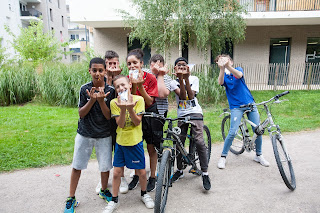 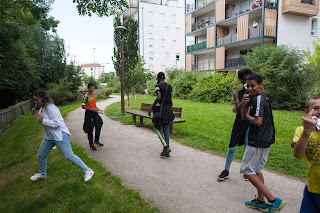 We then went to an IBIS STYLE hotel and found they were rather too expensive for us. We got back on our bicycles and after stopping to chat to a couple of hikers, we came to a Formula 1 Hotel. A pretty dire sort of hotel but it was cheaper than the IBIS. We have just had a picnic in our room. And that's another day over.
Posted by Cycling the Rhine at 00:56