In the early hours of this morning, JP became quite ill. He had a fever and was delirious - and having nightmares. He also had a headache. I gave him Panadol from our first aid kit and nursed him through the night. He had started feeling unwell whilst we were walking round the exhibits at the Technik Museum and the final straw seemed to be the ride in a space shuttle simulator just before we left. He was insistent that he should ride in it but I don't think it did him any favours as the motion was very unpleasant. He had a bit of a struggle riding back to camp and was very pleased to get into his sleeping bag, both to get warm and to rest. He felt much better in the morning.

I left the tent about 0900 hrs to try to buy some food for us. I left JP tucked up in his sleeping bag resting, having first made sure he was feeling better. Being a Sunday in Germany means that very few, if any, shops are open. I rode off to the main road where I spotted a lady with a bicycle about to leave a building. I waited for her so I could ask for directions. She was an elderly lady but spoke quite good English and was very chatty. She took me to the only shop open in the entire area; a bakers shop where there was quite a queue of people buying food. Inside the shop, I asked the assistant if she spoke English and she found me a lady to serve me who had lived in Florida, USA, for 25 years. I bought loads of food to get us through the day - and the next! I dangled two shopping bags from the handlebars of my bicycle and headed back to our camp. What a feast. 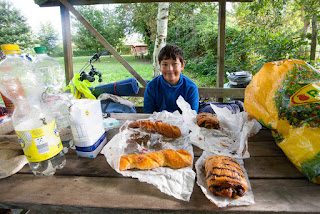 This photograph was taken the day after, on Monday 22 August 2016. JP in good form now with some of the food I'd purchased on the Sunday.

JP rested for the day. Although there was a swimming lake and beach nearby he wasn't interested in going for a swim - that must be a first - and indicative of how unwell he felt.

The rest did both of us good as we need all our strength for the morrow.