Versam to Chur - about 23 kilometres.

Erika came to see us and invited us for breakfast. JP kept his mouth shut this time. I went to the store with Erika and we both made some purchases. Mine included some chocolates for Ueli and Erika as a 'thank you' for their kindness and hospitality. The chocolates were named 'Merci' the French word for thank you. 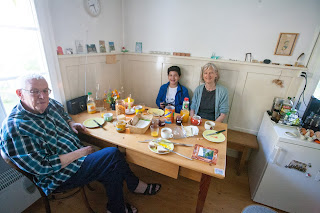 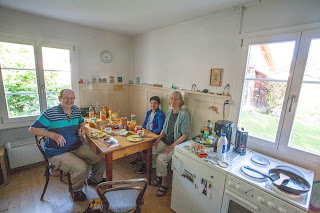 We enjoyed a very pleasant breakfast and conversation with Ueli and Erika. JP wanted to buy some sweets from the store before we left and, I learned much later, that Ueli bought them for him. How kind this lovely elderly couple of strangers were to us was amazing and meant a great deal to us. Ueli and Erika were aged 78 and 77 respectively and were enjoying being retired. Erika told us that it had been over 50 years since she'd been to England so I invited them both to stay with us in our home should then visit England again.

The day's ride started with a descent into the Rabiusa Gorge and onto the new bridge. The view of the old bridge was somewhat spoiled by the washing lines of the construction workers hung across the gorge. Not something we were expecting to see. Having gone down, it was then turn to go up! JP, such a hero, helped his dear old dad up the mountain. It was quite some climb too – and more to follow. The road clung to the side of the mountain like the narrow ledge it was; a ravine on one side of us and a sheer rock face on the other. Near the top of the gorge, I wanted to stop to take some photographs of this massive gorge, so I shouted for JP to slow down. No way! Off he went like a racing greyhound. I never saw him again for some time – and a few miles. I stopped to take my photographs and with wonderful timing a red coloured train appeared dead on queue. I was so pleased. 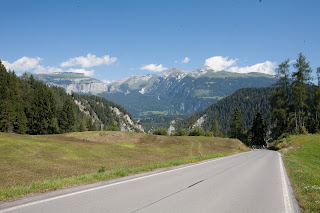 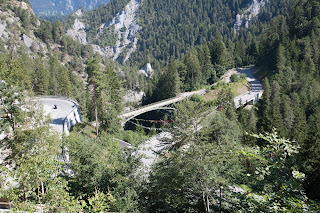 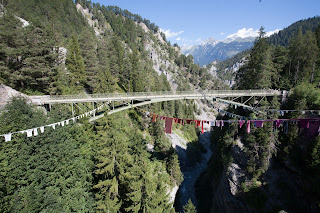 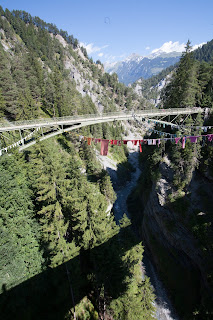 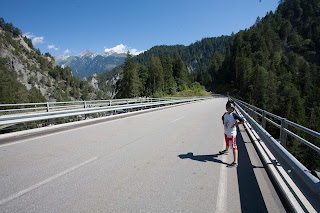 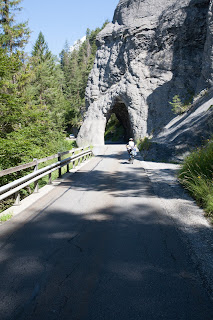 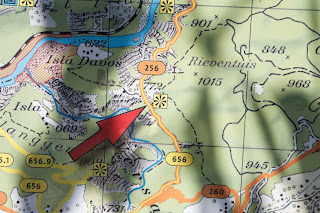 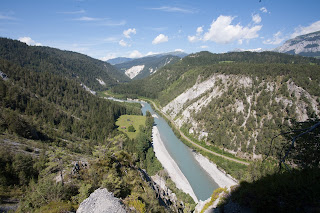 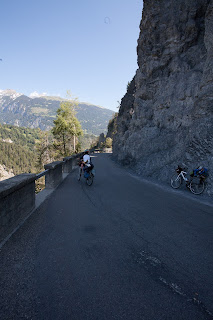 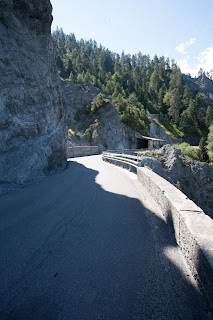 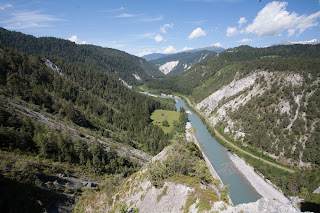 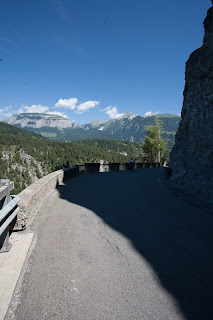 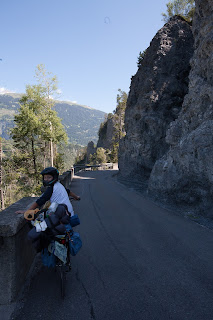 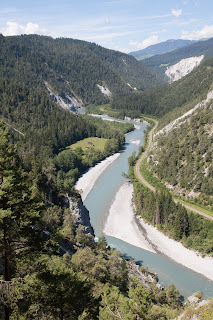 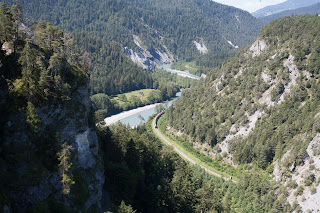 Off I went in search of JP, the road now heading downhill in an arrow straight line through a forest of fir trees in the direction of Bonaduz. Much time passed before I spotted JP sitting by a tree some distance away. I too stopped for a break and reloaded JP's bicycle (quite a frequent task). We met a family of cyclists with a most amazing set of wheels and loads of children riding on them. 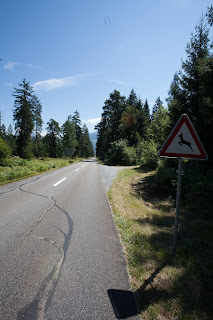 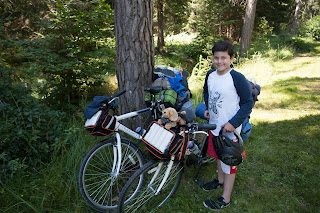 We crossed the level crossing and immediately heard the alarm sound, so I walked back to take some photographs of the train. Getting back to JP we got into conversation with a young man with a very sporty looking Suzuki motorcycle. JP seems to be quite into motor cycles. I'm not sure that's a good thing as he's dangerous enough on a bicycle! We turned into Via Campagne without going into the town centre and headed into farming territory. As he shot down the hill, JP found, much to his concern, that his rear brake wasn't working. He made it down the hill in one piece and managed to get his machine stopped without damaging it, so I fixed his brake and on we went. Passing through this lovely pastoral scenery was so pleasant. It was a hot sunny day and butterflies were everywhere, as they had been for much of our trip. 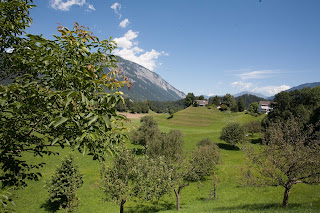 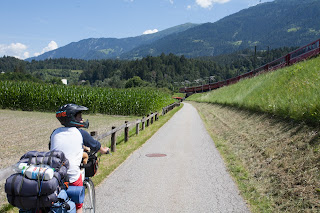 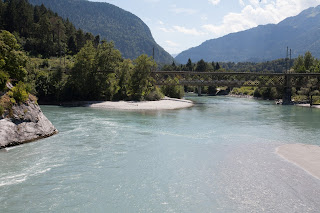 The flow of traffic was never ending. We parked in a small car park and JP asked me if we could go to the riverside beach for a dip. Back across the bridge we went and whilst he played in the water, I had a rest in preparation for the next climb. Once again we crossed the bridge and turned sharp left up the hill. Pushing, not riding, in the baking sunshine. I had to stop frequently to recover my breathing and slow my pounding heart, as always on these climbs. JP, ever the hero, never seems to run out of energy and stamina and helped me a great deal on these climbs. We were overtaken on one climb by a family on bicycles. The lady must have had legs of steel as she was towing what seemed to be a heavy trailer up the hill without dismounting. I was amazed. If only my legs (and lungs) were up to that!

We turned sharp right into Afuris Street where I stopped for a rest as JP cycled up the hill, saying he'd come back for me. After a while, I started pushing my bicycle once more. Part way up the hill I met JP heading back down towards me and together we pushed my bicycle up the hill to another fountain. JP swept aside the green algae and weed and we both dunked our heads into the cold water. What a shock that was. 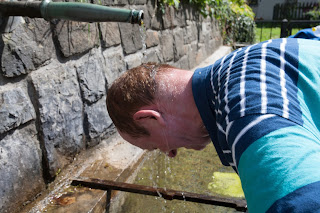 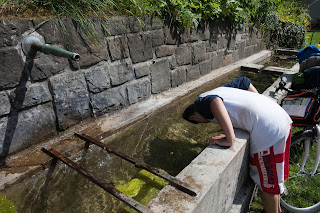 I then decided to place my head under the fountain outlet and that was even colder. JP spent some time tipping cold water over himself, using our water bottles to do so. We filled our bottles once more and attached them to our bicycles before heading uphill once more. We pressed on, eventually arriving in the town square of Tamins where we were hailed by the family of the lady with steel legs. We sat in the shade with them and enjoyed talking with them. JP buzzed off to the store for some ice cream, the fist of the trip, which made life somewhat bearable again. I showed our new acquaintances the photographs I always carry with me of Annelise. I was nearly in tears as I told them about her. We downed huge quantities of the cold water we had in our bottles and suddenly the truth about 'lady steel legs' appeared in front of me. She rode an electric powered bicycle. I told them about what I'd been thinking and we all had a good laugh.