We set off with good intentions that didn't work out as planned. We found our way back to the ferry and crossed the River Rhine yet again. 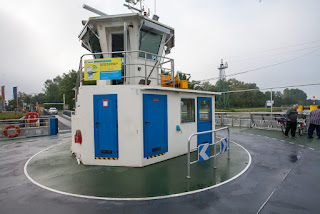 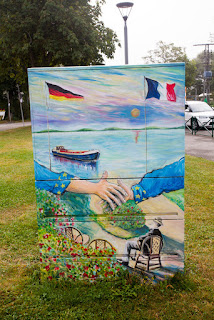 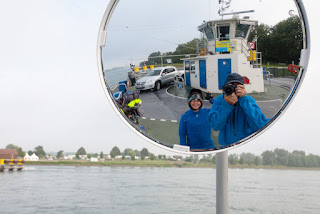 We knew we were in for a long haul and our hopes of achieving that were dashed because of navigational difficulties around Karlsruhe. The reason for trying this distance was because of the lack of campsites. Even though we had a map we still came unstuck several times and the signposts were no help at all – when they were to be found. We stopped for lunch and ate a Pizza (Hawaiian yet again) and downed plenty of apple juice.

We received help from several people who got us as far as around the Knielinger See area before meeting Heike who we followed over the bridge over the River Rhine south of Maxau and who suggested that we didn't have a chance of making it to Speyer that day as it was already late in the afternoon. I agreed with her and she took us to the railways station at Wőrth am Rhein. The only way of obtaining a ticket at this unmanned station was from a ticket machine – in German! Heike sorted this out for us and we obtained tickets only as far as Germershiem as there was a bus service from there to Speyer and we had no way of knowing if the bus could carry our bicycles and luggage. Getting our bicycles onto the train was much easier than in Switzerland as we could wheel them straight on board instead of lifting them up three steps. 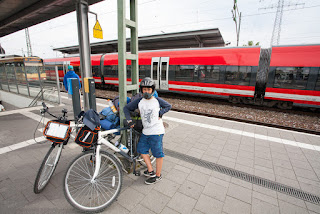 We had a speedy and comfortable ride to Germershiem, unlike we would have had on our bicycles. At Germershiem, we disembarked and rode off round the station looking for the bus to Speyer. I asked the bus driver if his vehicle could carry our bicycles and he helped me load therm into the vast underfloor lockers. What a relief it was to see them safely stowed away. I asked him how much we had to pay and he said he couldn't issue tickets as they had to be bought at the railway station. I was just saying that I didn't know how to use the ticket machine and when he indicated that he'd take us without a ticket. Brilliant! Not only were we on board with all our kit but we were also travelling for free.


We arrived at the bus station in Speyer and unloaded all our kit and got ready for the road. We had no idea where we were or where to go so my first port of call was a Pharmacy. Pharmacies are usually a good place to go for directions as there is usually a pharmacist who can speak English. They also have an internet connection and a printer which is great for printing maps. Sure enough, we got the directions and the map we needed. It was about 1930 hrs. when we arrived at the campsite which was rather basic but would serve our purpose.