We started the day with a splendid breakfast at the farm – sleep on straw, including Swiss Alpine Cheeses. JP had drinking chocolate, fresh baked bread and jam – he wasn't keen on the cheese which is most unlike him. It was great to have a cup of tea too – the first in more than 24 hours. 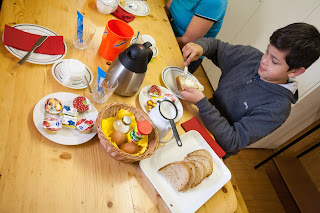 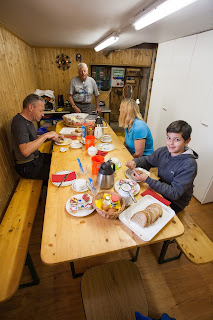 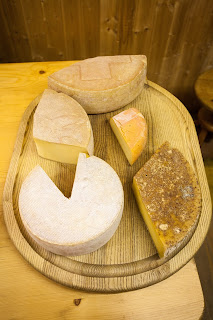 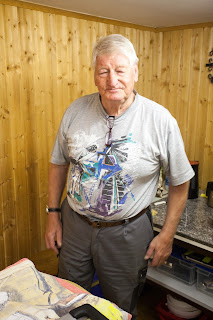 I got the laptop computer out of it's bag in order to back-up my photographs onto a separate HDD and found that the USB3 cable was missing – something of a disaster.

After some bicycle repairs and adjustments we loaded up and got going. We only got as far as the bridge before I realised I didn't have my handlebar bag (i.e. camera bag) with me. Back to the farm I went, leaving JP on the bridge. The farmer passed it to me – along with a few other things I'd forgotten. Back on the bridge I stopped to take some photographs. Onwards once again I stopped at the place where we'd stopped to take photographs of the rainbow and, as expected, there was my missing USB3 cable. Hooray! 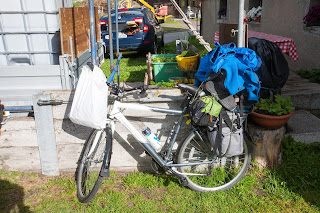 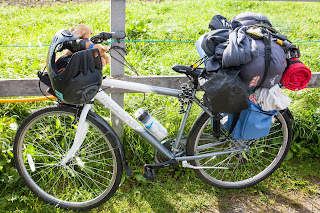 Back up the hill into Andermatt. I walked into the Tourist Information office and told the girl something of the trip we were making. She said I might be better helped in the Tourist Information office – I'd entered the wrong door and found myself in an estate agents! Nevermind. I went through the correct door and bought our train tickets to Oberalppass – something I couldn't have bought from the estate agent! 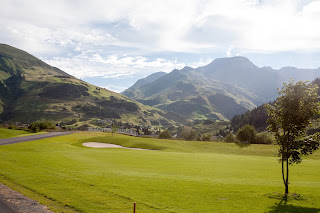 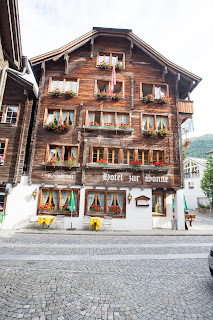 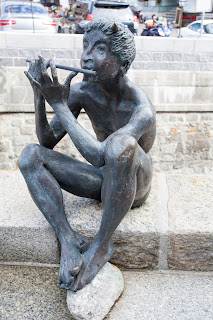 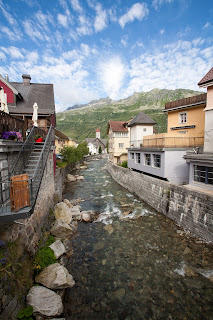 We wandered off to the railway station. We had plenty of time. One of the station staff informed us that we would have to unload our bicycles. Not funny. I informed him that this would be rather difficult but he was quite clear – and insistent. I left them loaded. After I'd walked some way along the platform to find him, I told him that we weren't getting on board the train that had just pulled in, but were booked onto the following train, to Oberalppass. Eventually he said we could wait and see what space was available on 'our' train when it arrived. Sure enough, there was plenty of room on board for our loaded bikes and on the went – with a lot of huffing and puffing up the three high steps into the carriage. 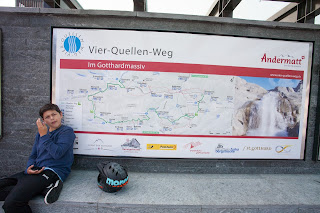 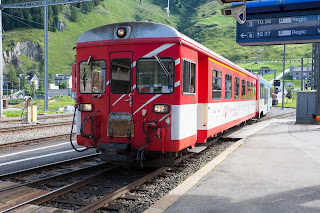 The scenery en-route to Oberalppass was stunning. I rushed from one side of the carriage to the other as different views came into sight as I wanted to grab every photograph I could. JP said people were laughing at me – not that I cared in the slightest. 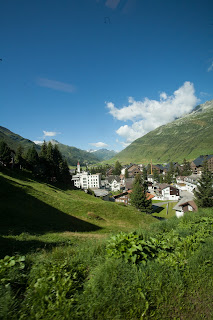 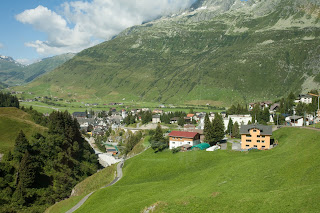 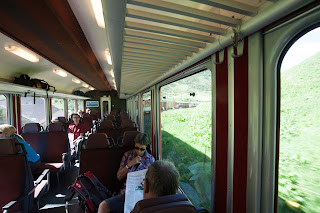 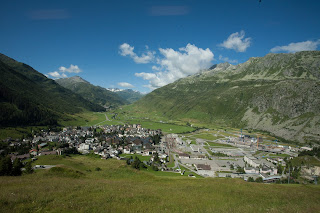 We arrived at Oberalppass where we met a family from Birmingham. On their bicycles too. They were very sensible as they were lightly laden and had a support vehicle. They would ride for a few days, then Dad would return for their car and take it to the place where they were staying. They only had to carry a few things with them. They were somewhat fitter than us as bicycle touring was something they did quite frequently and they'd already ridden the River Moselle and the Canal du Midi. I then made my biggest mistake. I elected to start our bicycle ride from Oberalppass, which is the official start, rather than trek uphill to the lake which is the official source of the River Rhine. It would have added a day to our trip but I think, in hindsight, it would have been worthwhile. This was the first time I've undertaken a bicycle tour under a lot of 'time pressure', so I was very concerned that another day would mean greater difficulty in getting JP to school on time at the start of the new academic year in his new secondary school. At this stage we still had about 1400 km to ride which seemed like rather a long way to me. We rode to the top of the Oberalppass with the family from Birmingham. They zoomed off at a rate of knots as it was their intention to ride the two most difficult stages of the trip in one day – something that would take JP and I three days, followed by a rest day. 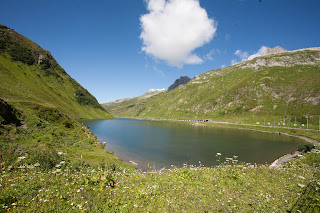 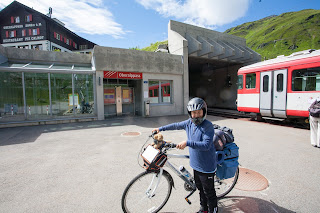 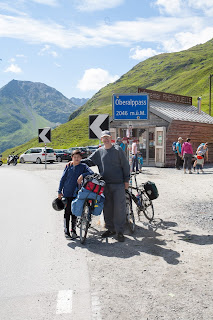 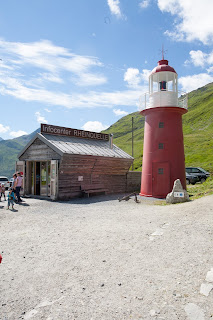 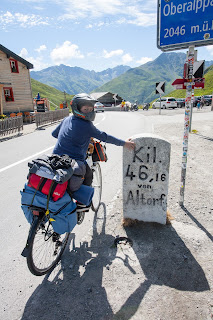 The descent from the top of the Oberalppas was simply amazing, hairpin bend after hairpin bend, including one where we had to slow almost to a stop to allow a bus to make it round the bend on his way up the mountain. Some of the route today was alongside a wall on 'our' side of the road – scary.

We stopped for a picnic on the grass outside some cafe or some place like that. We ate the remains of the food we'd bought in the Co-op the previous day – bread with some sort of pasta salad tipped onto it. JP went to empty our garbage bag and ask for some drinking water. The man he saw wasn't friendly and refused him on all counts – another unhappy bunny. We carried on regardless.

Someway out of Rueras, just before we entered a tunnel during another rapid descent, I found I was running on a flat front tyre. I managed to stop where there was a small parking area on the other side of the road. It was burning hot in the middle of the day and there was no shade at all. I got the puncture repaired with a patch and put the tube and tyre back on the wheel. As I inflated the tyre I realised it wasn't getting hard. Off came the tyre, out came the tube. Another leak close to the first. I had already examined the tyre but could find no reason for the puncture, let alone two of them. Another patch stuck on. Wheel, tyre and tube re-assembled. Tyre inflating nicely when I heard a Pssssst! All that time and effort in the heat had come to naught again. The patch had blown off the tube under pressure. This time I fitted one of the two spare new tubes we carry and no Pssssst! as I inflated the tyre. By this time I was dripping wet with perspiration and roasting under the sun. Not a happy bunny!

Later, at some stage in the afternoon, I heard a yell and a crash as JP fell off and spread himself all over the main road. Luckily, nothing was following him or his bicycle might have got severely damaged. As it was, I managed to stop and park my bicycle and go back to pick him up, and his bicycle and set them on their way again. He'd managed to get a wheel in the gutter and this brought about his downfall.

A few kilometres from Ilanz, we got onto an off-road path which kept us both away from the traffic. We met quite a lot of cyclists, one of whom was an older man, not as old as me, with two children in a trailer behind his bicycle. The children were a boy aged 6 and a girl of 3. He advised us to stay on the right-hand side of the River Rhine.

We rode into Ilanz, hot, thirsty, hungry and very smelly as it had been roasting hot all day. I bought this biggest pizza they made at vast cost (CHF32 – more than £25) and a couple of Cokes and we sat and gorged ourselves. We got the pizza maker to package our remains into some aluminium foil – enough for breakfast – and set off back the way we had come. We rode out of Ilanz back on the path beside the river where I'd spotted a potential place to camp that night on the way into Ilanz. Sure enough, it seemed reasonable and was already occupied by another cyclist. We made camp at 2000 hrs. after covering a total of about 55 km. I was quite relieved to have got so far in one day – albeit much of it downhill.
Posted by Cycling the Rhine at 06:59