Basel to Brisach - about 65 km. Our longest ride so far.

John and Cheryl got away some time before us. As usual, we're not fast movers when it comes to striking camp and loading our bicycles.

We eventually got going and shortly afterwards we met John and Cheryl, who'd just got going again after stopping for coffee and croissants. The temperature was quite pleasant for a change following the early morning chill. This was the first day we'd had where it wasn't either freezing or roasting. We also found out the this particular route was largely devoid of places to buy refreshments or obtain drinking water from public fountains. It was a long haul too. 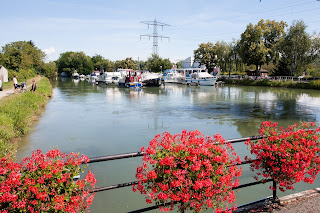 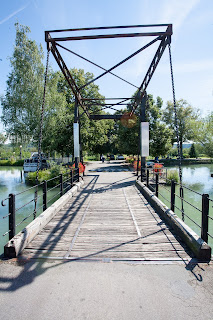 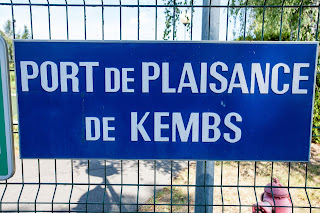 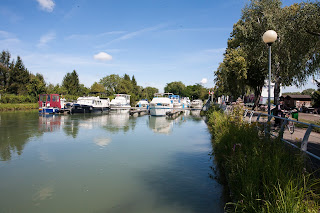 Much of the route was alongside the Canal du Rhone au Rhin so the going was easy. We hadn't been going all that long when I found my front tyre was running flat. Another puncture. Once again, I repaired the tube with a patch, reassembled everything and then found the tyre had gone flat again. Loyally, John and Cheryl and stayed with us whilst all this was going on. I used the last of the two tubes I'd brought from England and off we went again. Or rather, not quite. My sleeping mat had fallen off and headed for the canal. Some water plants had stopped it going into the water but it was out of range of my limbs - without me going into the water too. Some ingenuity was required for this. With one hand I held one of our longest bungee cords and the other hand was holding onto Cheryl's outstretched hand. I dangled the bungee cord over the cord of the stuff sack that contained the mat and somehow managed to hook it in such a way that would have made a top class fisherman envious. 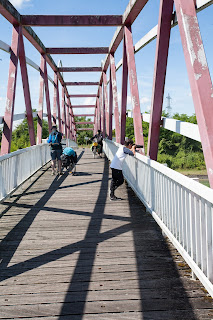 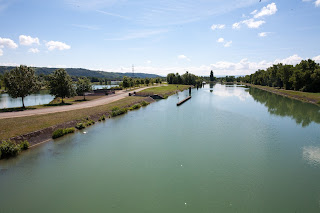 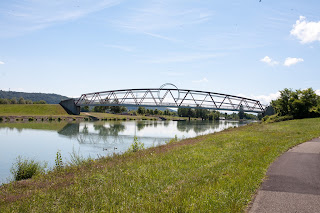 All packed, and off we went again. The path led us for some kilometres along the towing path of the canal. We cracked on at quite a pace and extremely fortuitously stopped for a break  underneath a bridge where there was some shade. Much to our astonishment, John and Cheryl and nothing at all by way of food and drink. JP and I shared what we had with them. We gave them a bottle of juice whilst we drank a bottle of milk. We shared our apple sponge cake and ate our pate filled roll. 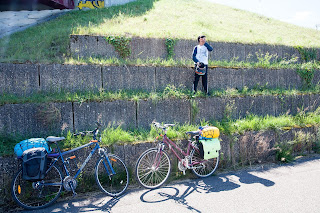 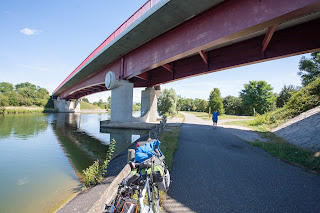 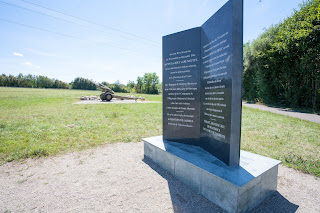 The bridge marked the scene of the battle that took place at Pont du Bouc in November 1944.

We left the towing path at this point (or Pont), headed across the bridge and into a forest for some 18 km. If we'd had another puncture it would have been a serious problem. After getting safely through, we eventually came to a village where we were able to replenish supplies and eat another meal. 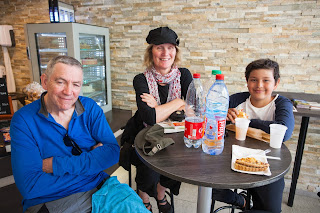 The French must really love eggs, as outside the shop was a vending machine where eggs could be purchased 24 hours / day! 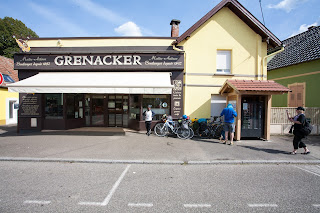 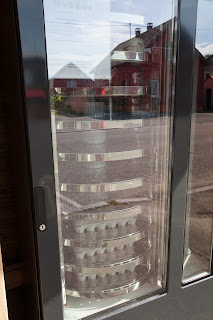 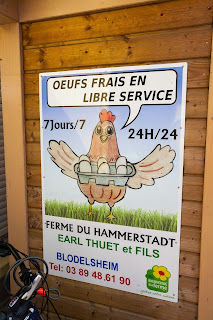 We cycled on and eventually crossed the French / German border into Brisach. John and Cheryl went to a nearby campsite whilst JP and I waited (and waited and waited) for our friend Brigitte to come and find us and whisk us off to Frieburg (or so we thought).
Posted by Cycling the Rhine at 14:58