We stayed at the youth hostel: 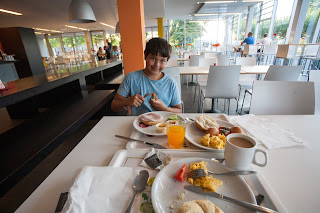 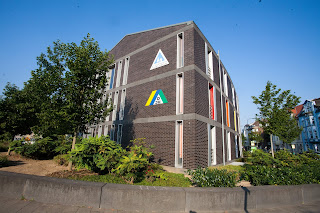 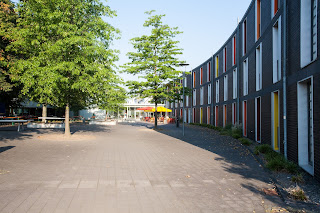 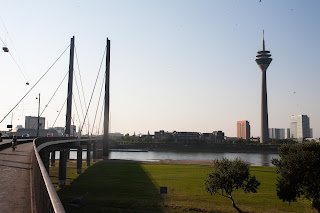 We listened to some music being played and had a small ice cream cone to help us cool down. 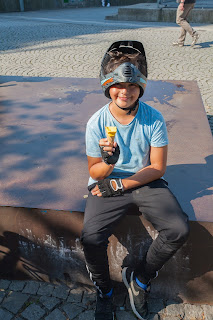 After going to the railway station to buy our train tickets for tomorrow, we went sightseeing and found the place to be buzzing. People everywhere – and huge numbers of trade stands.

We visited one of the better known Roman Catholic churches; a somewhat depressing experience. 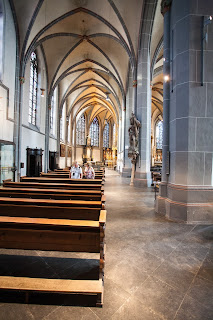 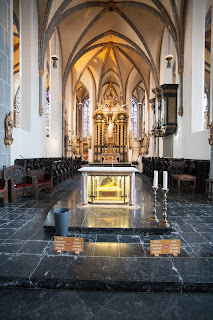 We then went for an hour long trip on one of the many tour boats. It was scorching hot again but JP in particular enjoyed the trip. 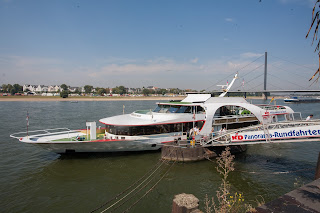 At JP's suggestion, we re-crossed the River Rhine, and spent the afternoon at one of the festivity parks by the side of the river. Many of the activities were free, so JP really enjoyed taking part in all sorts of things – climbing and mountain biking being just two of them. 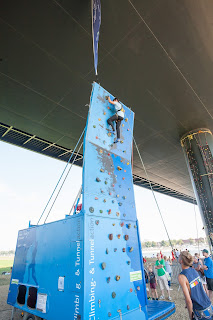 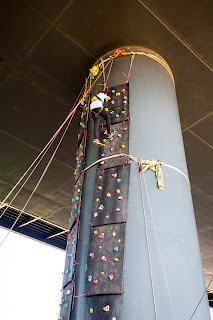 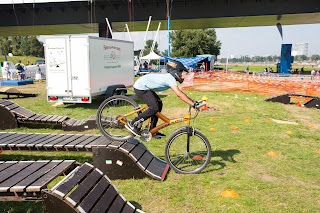 Late in the afternoon, we sat and ate some Bratwurst (giant hot dogs), before heading off to find our bicycles.

I'd just started to ride mine when JP informed me I'd got a flat rear tyre – yet another puncture. We wheeled my bicycle back to the mountain bike activity centre and one of the staff there inflated my tyre with a really efficient high pressure pump. We pedalled off to the youth hostel and got there just before the tyre deflated again – and just as it started raining – just a quick summer shower.

The problem with the 'new' bicycle is that the tyre valves are not the same as those of the spare tubes I have available to use. In fact, the valves in my spare tubes won't even fit through the hole in the rim of the wheel. Not only that, but I couldn't buy a new tube as it was well past closing time of the local bicycle repair shop – and it's Sunday tomorrow – a day when almost everything is closed.

The only option was to patch the punctured tube – and that has always failed in the past. Unlike the two last punctures, this one was in the rear wheel. Not funny. Front wheels are easy in comparison. I took the rear wheel out of the frame and removed the tube. Hands now covered in oil from the gears and chain. I'd borrowed a good air pump from the youth hostel receptionist and it rapidly inflated the tube so I could look for leaks. I found the leak very quickly – in fact it looked like a row of leaks but thankfully only one of them appeared to be discharging air.

I stuck on a patch, put the tube and tyre back on the wheel and waited. And waited; eating an ice lolly that JP had appeared with. All appeared to be well.