Breakfast comprised, for me, battered banana slices on a piece for bread saved from last evening's meal. For JP, chocolate biscuits on another piece of bread.

We left the campsite at 0900 hrs. very early for us. Fortunately, the receptionist gave me a map or we'd probably be still wandering round the village like a pair of lost sheep. As it was, although we managed to get out of the village it wasn't quite in the right direction, although it was roughly the right way but we failed to see much of what was described in the guide book.

We stopped for a Pan au Chocolate and a battered banana which we carried with us. Our stopping place was by a slipway into the River Rhine where JP had a paddle. JP refused to leave the water so I got on my bicycle and pedalled off without him. That got him moving! 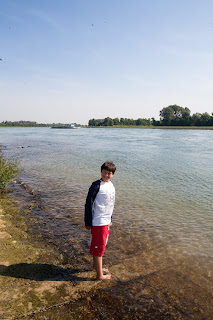 Somehow or other we managed to get to the Drusenheim ferry after riding about 11 km, where we stopped at quite a posh restaurant where we lowered the tone considerably; looking like a pair of tramps. We had some ice cream served in unusually shaped glass dishes. The waitress also filled our drinking bottles with ice cold water and a few ice cubes. We'd need all that and more on this hot day with few places to refresh ourselves en-route. 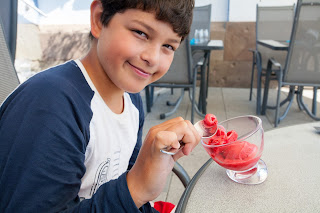 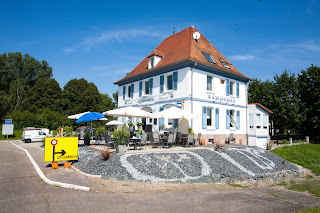 As usual, our navigation caused us some problems, although nowhere near as much as when we were in the Colmar area. In France, signposting wasn't as good as in Germany, let alone in Switzerland. Either that, or we were so far off track that they would have been irrelevant anyway. The guide book wasn't much help either, again, probably because of my poor navigation – and we didn't have a map.

We arrived at the Seltz Ferry and instead of by passing it as instructed by the guide book, JP decided he'd prefer to camp on the German side of the River Rhine instead of the French side. We crossed the river by the ferry which was connected by a long steel cable to another stretched across the river and supported by two pylons. 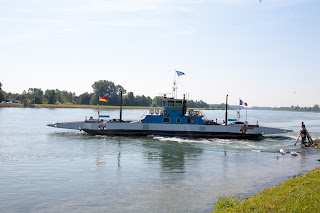 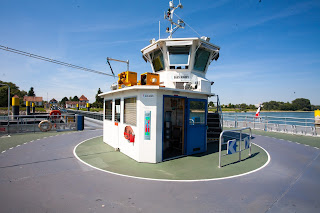 On arriving at the German side of the river, we paid a visit to a mobile canteen where we bought a couple of sausages in rolls – like giant hot dogs and some cold drinks. 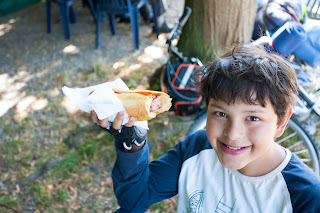 By now it was 1500 hrs. and we'd had enough time in the saddle. It took some time to find the campsite as we seemed to fully encircle the place before we found the entrance – via a golf club where we stopped to ask for directions. Guess where JP headed? The lake, of course. After a struggle, I managed to persuade the washing machine to come to life and got some washing done. Once again, I rigged a clothes line and hung them to dry.
Posted by Cycling the Rhine at 12:06