We didn't get off to a good start as the alarm clock failed to ring at just before 0500 hrs. Instead, I awoke at 0515 hrs. – about 20 minutes later than I wanted. That 20 minutes delay was crucial as we almost missed our flight to Zurich. Getting through Manchester airport took more than 2 hours – longer than the flight! All the signs stated 'Gate Closing' as we rushed through the duty free shop heading towards the boarding gate. I sent JP on ahead as he can run faster then me – and for longer! We arrived at the boarding gate barely time before the flight should have been taking off. We were so fortunate that the airline had also had problems and there was a delay of 30 minutes. 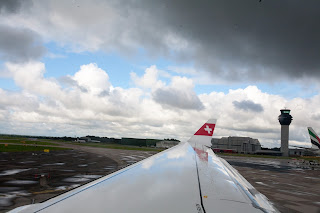 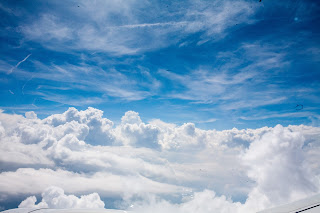 It took us about 2 hours to re-assemble and load our bicycles in Zurich airport, much to the disgust of one of the baggage trolley pushers who made a nuisance of himself a couple of times. He told me to move, but I informed him that we weren't going anywhere until we'd finished assembling our bicycles. He wasn't a happy bunny. We left him behind and headed for the railway station – down the escalator! If you've ever tried getting two heavily loaded bikes down an escalator, you'll understand just how much fun we had. We nearly went down those moving stairs faster then the stairs travelled. However, we grimly hung on to our loaded steeds and arrived at the same time as the stairs we were standing on. Just. 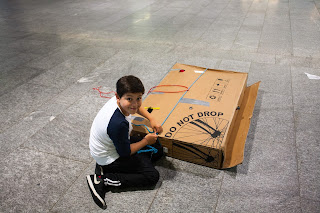 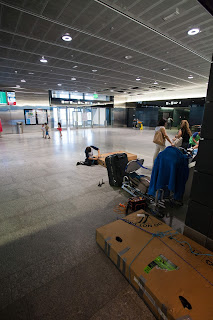 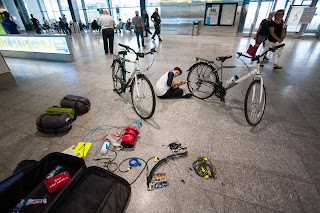 Our train journey to Andermatt began. I thought we were able to get a direct train, but no, that would have been too easy and nowhere near as much fun! The first train took us from Zurich to Zurich. That is, Zurich Airport to Zurich HB. We then had to disembark and find out where to go to find the next train, this time from Zurich HB to Arth-Goldau. This was a fairly simple matter, albeit that getting our bicycles onto the train would have taxed the muscles of Samson. 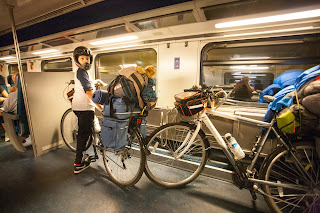 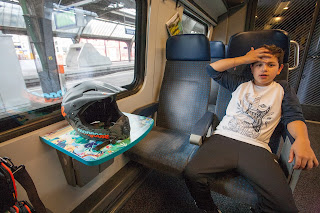 The next train took us from Arth-Goldau to Göschenen. By the time we'd struggled our bikes into an empty lift (we had to wait for one of those rare creatures) and gone to the wrong floor, then tried again to another floor, again, another fun ride on an escalator, we'd missed our connection. We eventually got on the train where our bicycles blocked the entire room reserved for bicycles, much the the disgust of a disgusting looking, dirty, scruffy, stroppy passenger who voiced his protestations without effect. He went off, probably to report this breach of safety and convenience to the ticket inspector who, after some time, showed up and voiced his protestations too. He said we should move our bicycle into another compartment as soon as we arrived at the next station. I said 'no problem'. And he looked much happier. I then asked him if the train would stop long enough for us to carry out this monumental task, assuring him that it would probably take at least 10 minutes to do so. His expression changed. He looked at his electronic timetable, much perplexed. The Swiss don't like their trains to run more than a micro-second adrift of schedule so he had to give this some major thought. After exercising his brain for some time he came to the conclusion that moving our bicycles would delay the train far too long and informed us ' never mind, leave them where they are'. Another unhappy bunny! 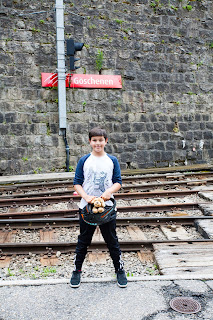 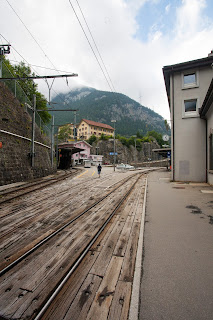 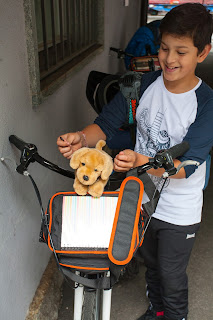 Our next train ride was from Göschenen to Andermatt. No excitement on this little trip except JP's bicycle falling over and various other cyclists coming to the rescue to help me stand it up – something that would happen frequently during our adventures. I soon learned that JP fell off quite frequently.

At Andermatt, we headed across the railway tracks and into town. The chain on JP's bike fell off another event that was to happen fairly frequently. We eventually arrived at a Co-op store for the first proper food we'd eaten since our very early breakfast, many hours earlier. The Swiss, true to their reputation, didn't exactly feed us well on the aeroplane – just a miserly croissant. We'd bought a couple of bottle of drink in Zurich airport but that had been many hours before, so we were very dry and hungry by the time we arrived at the Co-op. We weren't dry for long as the Heavens opened and we got a good soaking, especially JP who was wearing just a tee shirt on his top, his waterproof jacket being buried somewhere deep inside one of his pannier bags. 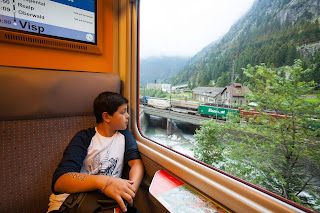 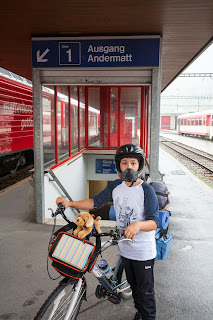 I zoomed off, with a bag of shopping in one hand, my bicycle in the other and with JP following. I got to the end of the road and looked around. No sign of JP! Nowhere to be seen – and it was a long road. I waited for a while but still no sign of him. I reluctantly turned round and started up the hill towards Andermatt in the rain and cold. As I rode up the hill the driver of a vehicle coming towards me started flashing the car's lights at me. We both stopped and he told me that he'd stopped to help JP with his bicycle chain which had fallen off again. I continued up the hill into Andermatt where I found JP. Back down the hill again, this time with JP close behind. Again, I stopped at the bottom of the hill where JP yelled at me to look at something. JP had spotted a double rainbow framing the town of Andermatt. Wow! This was special. There was even signs of a triple rainbow at times. I grabbed my camera and shot a few photographs of this spectacular sight. 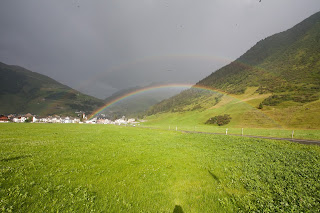 We rode on, crossing the railway tracks and turned left, off the path, heading towards a bridge – signposted as taking us to the golf club. As we approached a farm, I noticed a Honda CRV heading towards us. As our paths crossed, slowly, the voice from within asked if I was Alan Cook. I confirmed this was the same and continued to the farm. The Honda CRV driver was the farmer, with his wife, who returned to the farm to greet us and make us welcome to their 'Sleep on Straw' (Schlafen im Stroh) accommodation. It was so good to have a shower and get some clean dry clothes on after our day – and no doubt the other occupants were grateful too as I'm sure we didn't smell too pleasant. 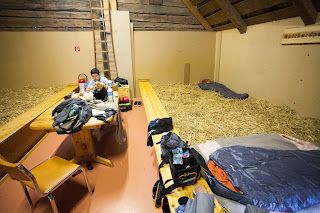 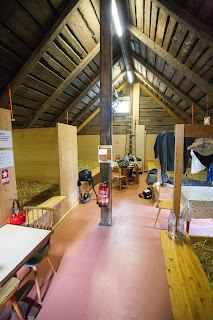 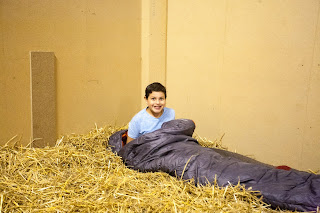