If there is one thing I really hate, it's preparing for a trip - the planning. A trip of any sort, not just a cycle ride. I'd much rather just GO! That was one of the great advantages of living in The Netherlands; we could just get in the car and GO! No ferries or flights to pre-book. Just GO!

Of course, it is a great asset if one has a bicycle on which to ride when going on a cycle trip. That was the starting point. I ordered the two cheapest bicycles I could find on line ('Muddy Fox - Voyager 100' made in Bangladesh) and that's what we'll be riding. I also ordered two sets of pannier bags in which to load our stuff. As I write this, I still need to obtain some handlebar bags for our cameras to be carried in. And, believe me, our handlebars have a funny shape, as you can see in the photograph below. 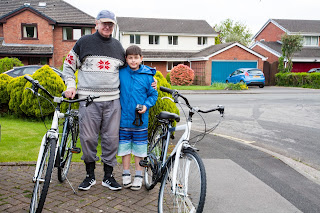 We've been for a few short bicycle rides on our new steeds, including a trip around the Preston Guild Wheel; about 21 miles. They may not be top quality bikes but they got us round - albeit with a few missed gears! A tool kit is an essential part of our luggage as there are sure to be many running repairs required.

This cycle trip is causing me more stress than you can imagine as there are so many things to think and worry about. I've booked our flights and paid the extra for taking our bicycles. Our passports are up to date.

I took my cheapie bicycle into Halfords the other day to try and buy a few extras for it. I mentioned to the salesman that I was intending to ride it for the full length of the River Rhine. He shook his head. I asked him if he didn't think it would be up for the trip and he said I was putting a lot of trust in it. He obviously had considerable doubts. Or could it be that he was doubting me; not the bike!

I've arranged our first night's accommodation in Andermatt in Switzerland. We are staying on a farm and sleeping on straw! Have a look at URL: Sleeping in the Straw

After that, anything could happen - and probably will. No doubt it will rain nearly every day and be constantly overcast so we can't get any beautifully lit subjects in our photographs.

We had a practice at loading some of JP's stuff into his pannier bags yesterday. He was nearly beside himself with excitement. Anyway, we came to the conclusion everything will fit. Whether or not I'll be as successful with my things remains to be seen.

Another considerable worry is being able to get back home in time to get JP to his new school on the first day of the new academic year. Would you believe that the first day of term is on a FRIDAY! How silly is that! Last year JP had 7 weeks of summer holiday. This year he has less than 6 weeks holiday and only 5 weeks in the saddle. Anyway, if he's late starting school, then so be it. This will certainly be an educational trip for him - far more so than being in school. Of course, with the appalling weather we are currently enduring - RAIN! RAIN! RAIN! and more RAIN! - then we just may pedal like mad to get through the route as quickly as possible as it won't be worth stopping to go site-seeing.

A lot has happened since my last posting of this preparation stage. I needed to buy so many things!
The weather has been much better recently too, so that has cheered me up somewhat.

I'm very relieved to be able to inform you that I've managed to obtain a pair of suitable handlebar bags. Getting them big enough to hold our photographic gear was the problem - as well as those strangely shaped handlebars that our bicycles are fitted with. Anyway, problem solved.

The photographic equipment we can take is very limited, so we'll have to make the best of what we can carry. For still photographs, I'll take my trusty old Canon EOS 5D - now 10 years old, together with my Canon EF 17 - 40 mm f4 'L' Series lens (this is a very wide angle lens). I would have liked to have taken my Canon EF 24 - 105 mm f4 'L' Series lens but that broke some time ago and I haven't bought a replacement yet. There is a Mk II version coming out in the near future so maybe I'll buy one of those. For video work, I'll take my Black Magic Design Pocket Cinema Camera with the Panasonic Lumix G Vario 7-14 mm f4 ASPH lens (also very wide angle). I have enough storage cards for more than 10 000 still photographs and about 1.5 hours of video. I also intend taking an external HDD for making back-ups as I go - and try to back-up on line as I go - if I can get computer and internet access en-route. JP will take his Canon EOS 1000D and his GoPro video camera. I don't know what lens he will take for his Canon - I hope he will take something longer than a very wide angle lens!

We've also tried out our new Vango tent - at least pitching it. This proved to be a very useful exercise as it wasn't as straightforward as you might think. This was mainly because the orientation of the flysheet was not at all clear. However, we managed it okay in the end. The hard part was getting it back into it's carry bag afterwards - Grace managed it for us, so I don't know how JP and I will manage without her during our trip. 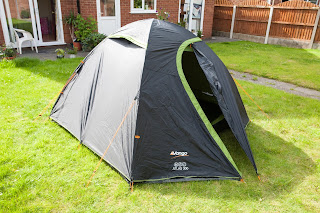 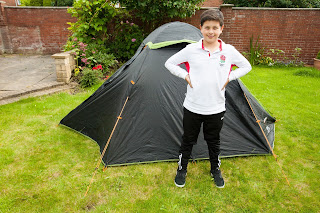 This afternoon we had a go at a practice pack, followed by a short bicycle ride to make sure we could ride well enough with the loads on our bicycles. All went reasonably well and nothing fell off! 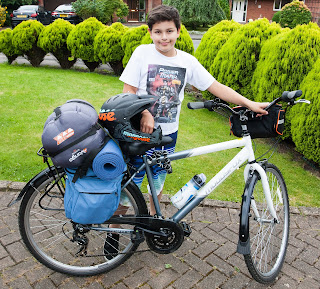 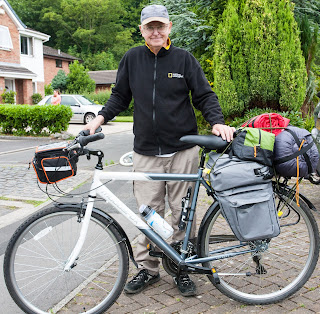